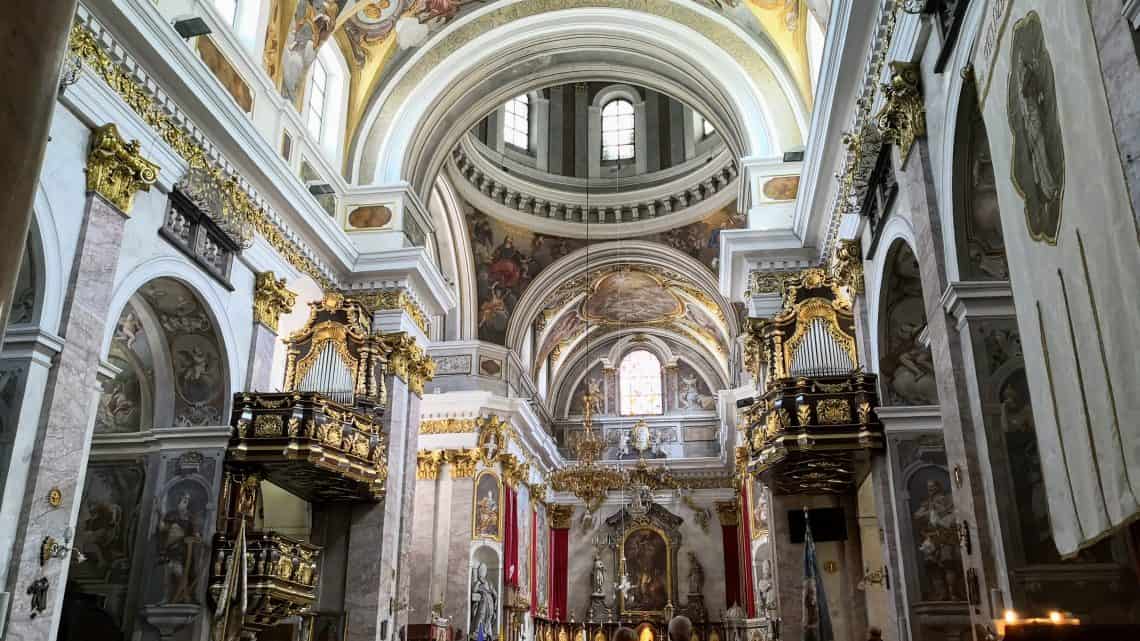 Well, the first thing to say is what a destination for a short break!

We loved it. Part of this was because Ljubljana also sells craft beer!

We were there for 3 nights & was pretty much perfect.

We stayed in an Airbnb.

Through the accommodation, we organised a lift from the airport when we arrived.

He did indeed turn up….but it was a car that could have been described as a ‘works van’!

Anyway, we got to the accommodation only to find the entire street that apartment was on was being dug up. We also couldn’t ‘check-in’ yet as it hadn’t been cleaned so we changed into shorts & off we went.

Not the best of starts if we are honest. 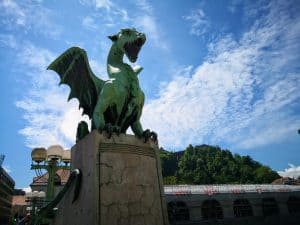 Anyway, within 10 minutes all had turned around.

The sun was out & our apartment was a 3-minute walk from where the centre starts & right by ‘Dragon Bridge‘.

Ljubljana And Craft Beer – They Have Embraced It!

Contents show
1 Ljubljana And Craft Beer – They Have Embraced It!
2 Walking Tours – The Must Do Of A City Break?
3 Is It Worth Doing The Union Brewery Tour Ljubljana? No Idea. Didn’t Bother!
4 Lajbah Serving Ljubljana Craft Beer – Lots Of Choices

There is also beer!

And true to the articles we had read, they have indeed embraced craft beer! 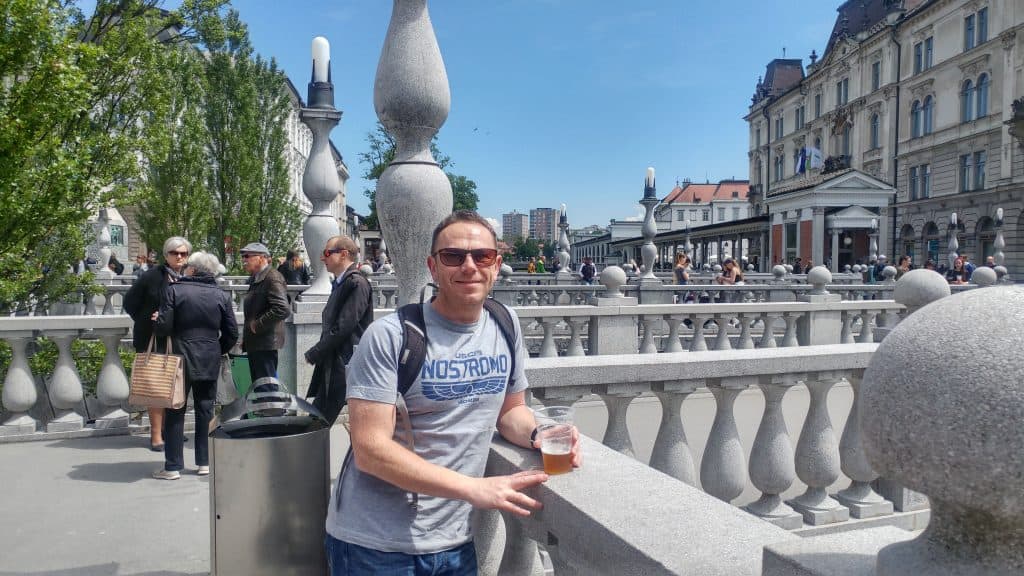 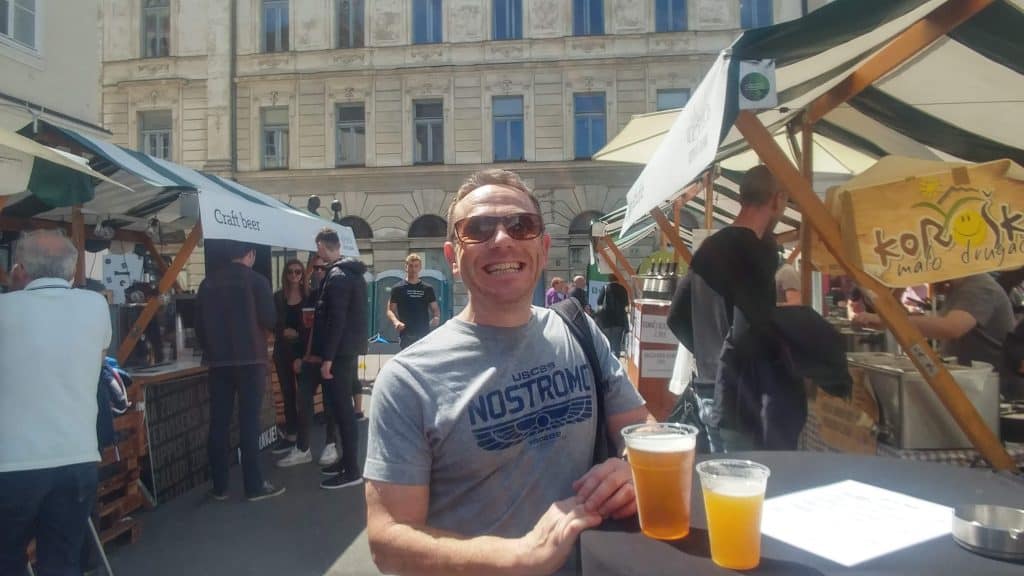 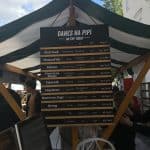 We then proceeded to have a wander about. This is when we discovered that it is not that big & ideal for a weekend away.

This then leads to an afternoon that I am ever sure we will be able to repeat.

We ticked most of the Ljubljana ‘To Do’ boxes in one full-on day!!

We did the famous sausage place – Klobasarna 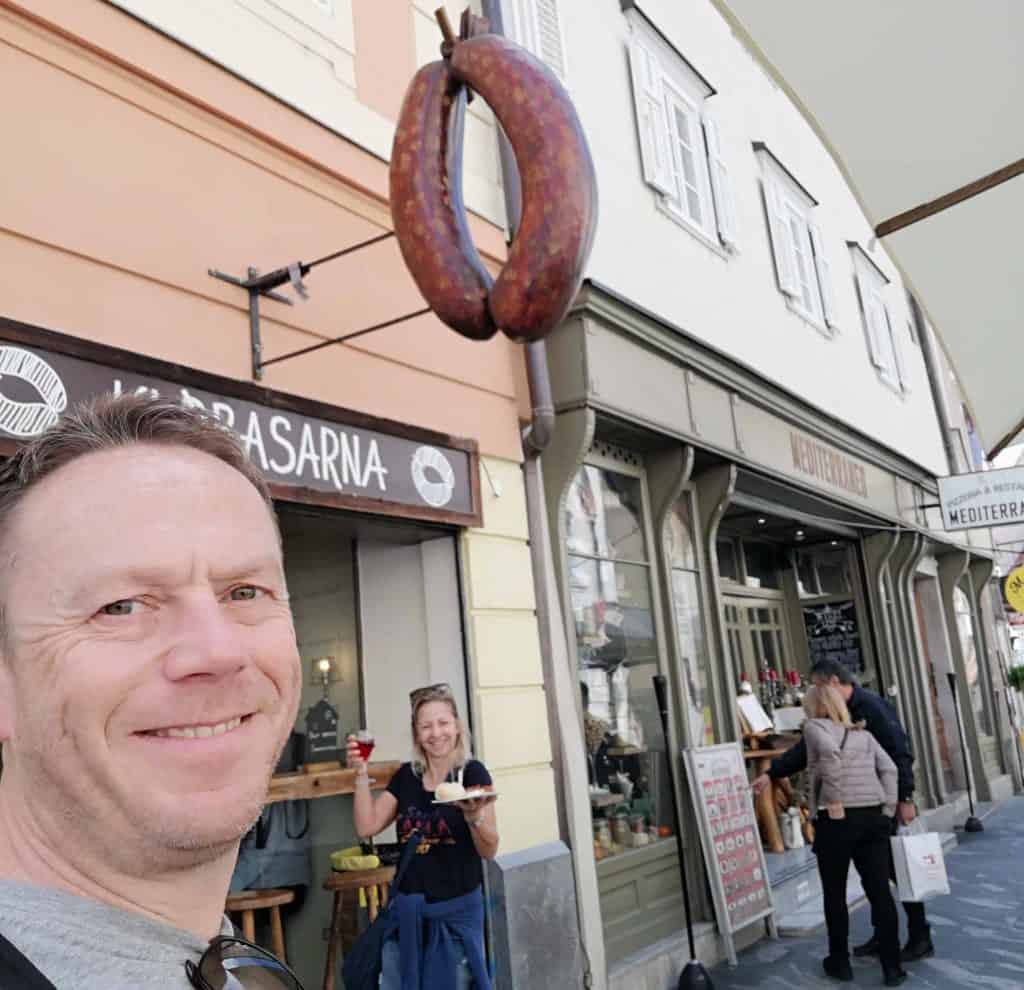 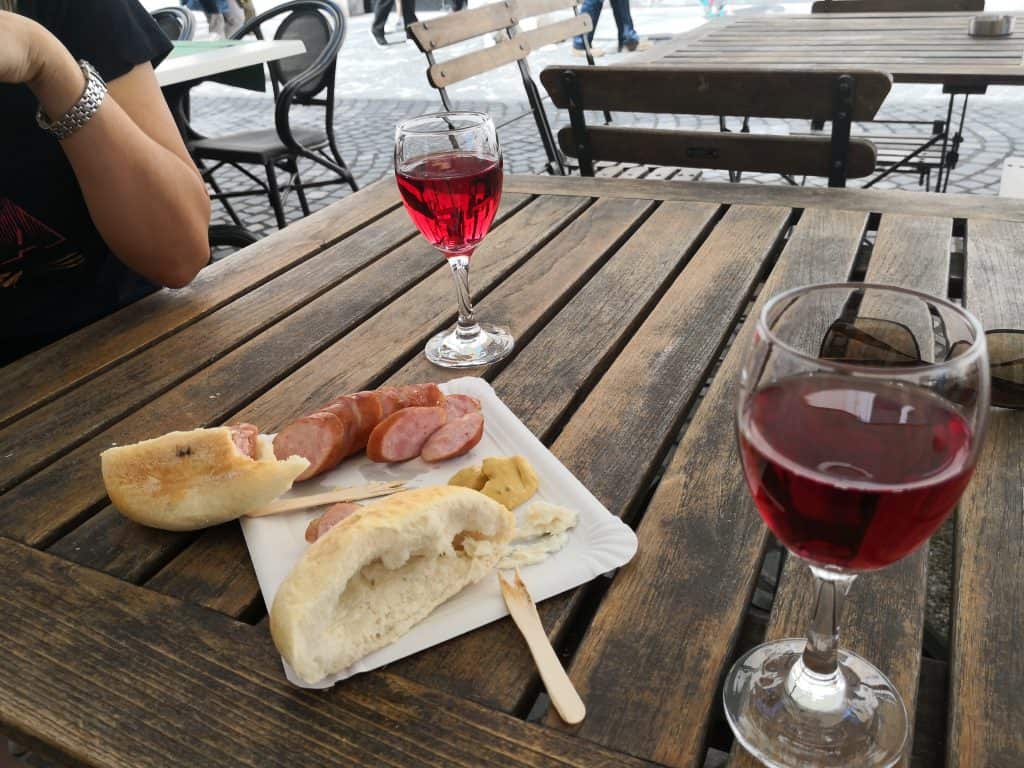 We went into the famous church in the centre. It is the one with the 3D door showing what I think as bishops. I have to say it was one of the most impressive churches I have ever been in – it was stunning!! – Cerkev Marijinega oznanjenja 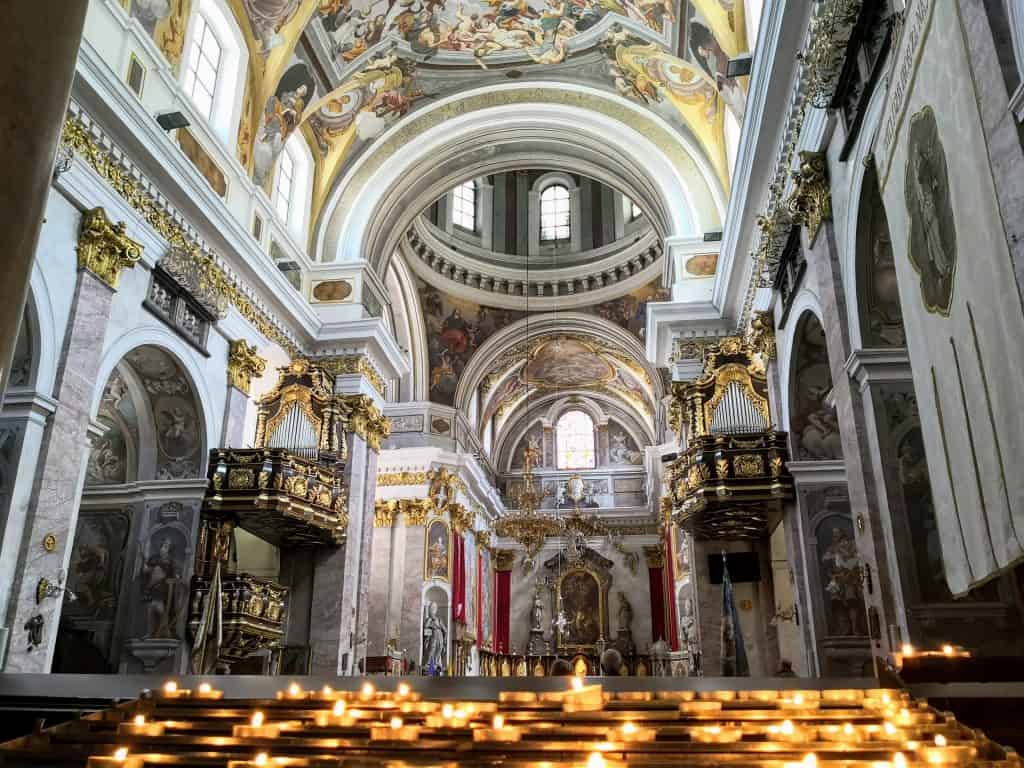 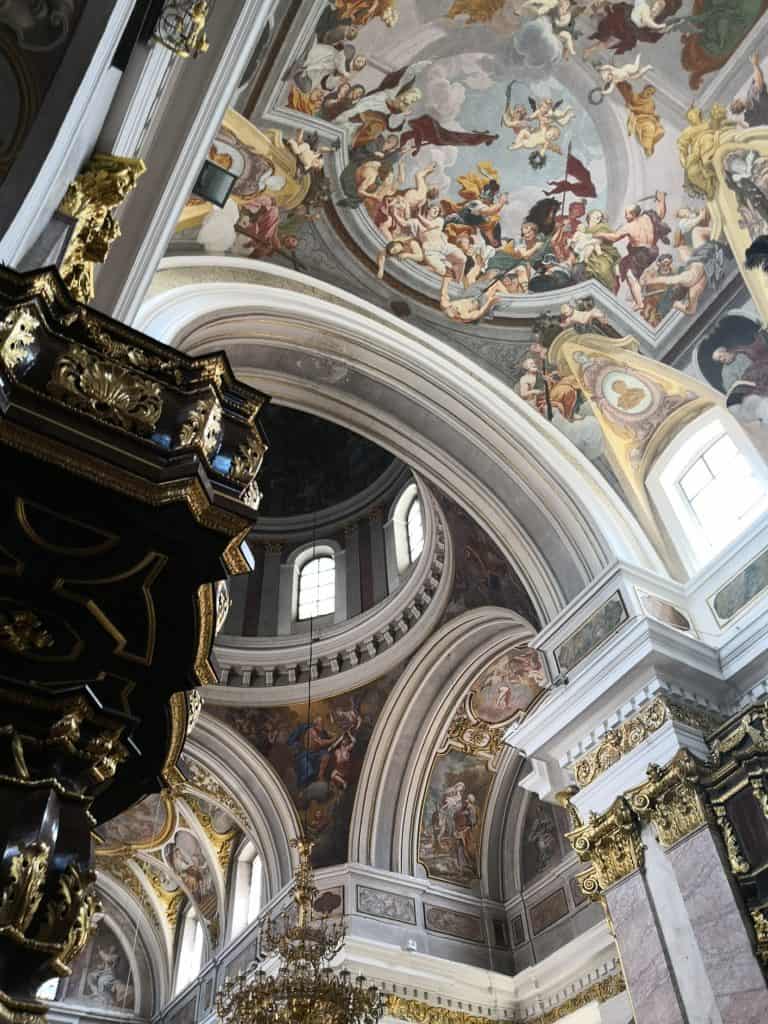 We walked up to the castle & didn’t even use the lift! We also managed to get to see what we wanted to see of the Ljubljana Castle without paying which was the view & get some photos!

Below is a photo from the Castle. 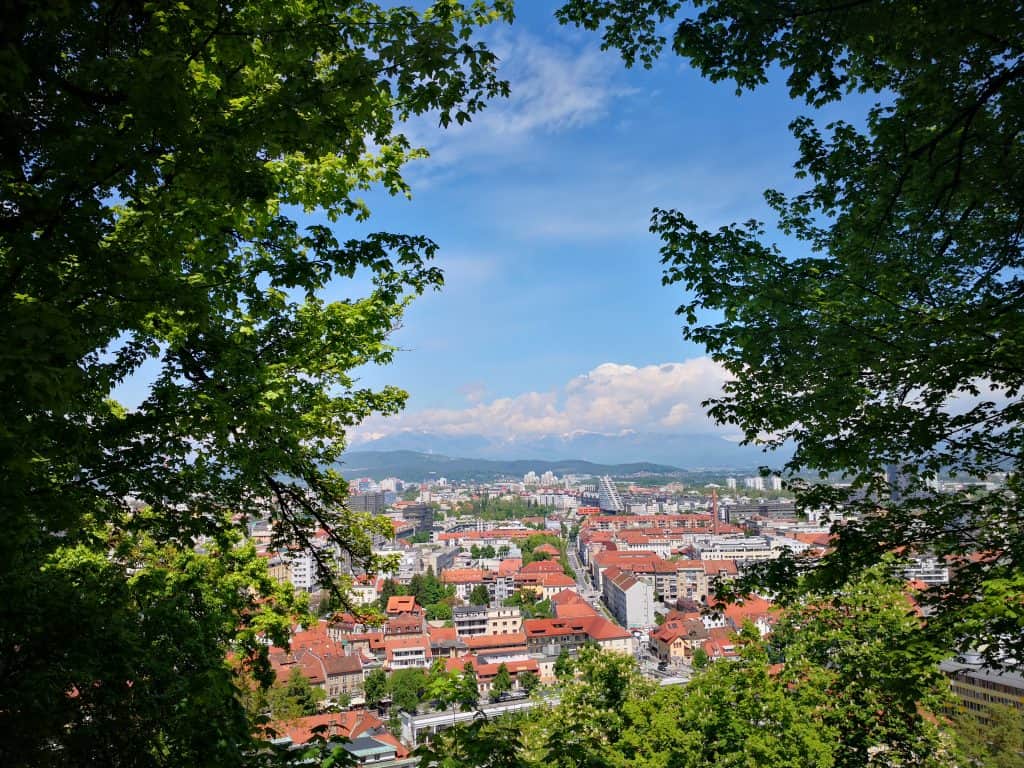 We did the boat tour along the river & under some the 17 bridges the capital has including the ‘Triple Bridge‘. The tour left from the also famous bridge covered in padlocks. 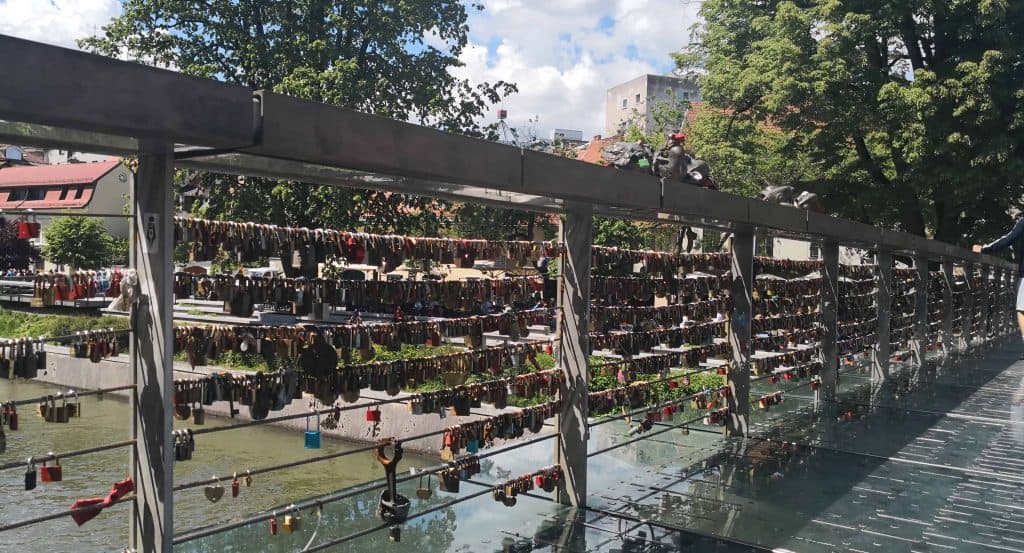 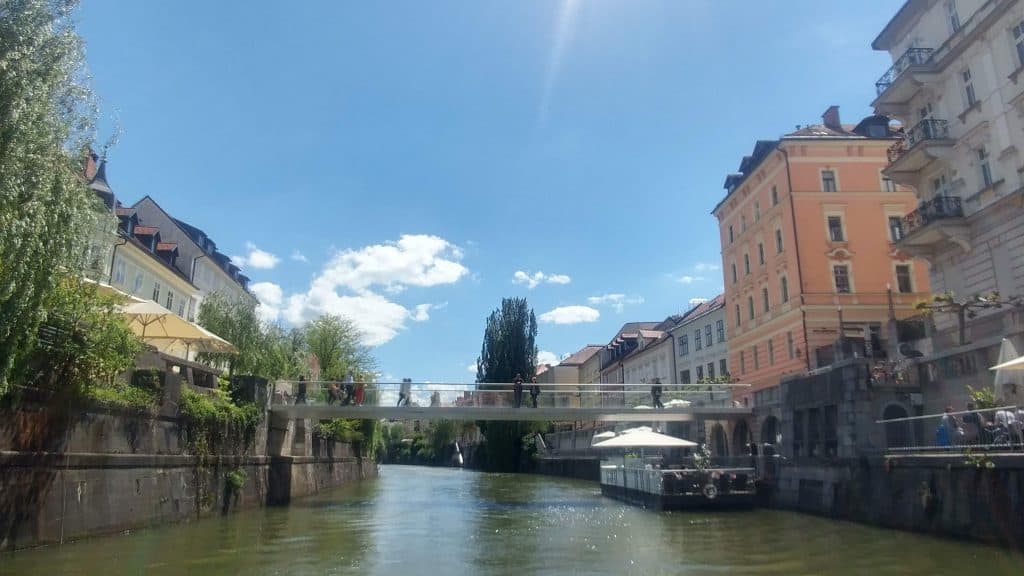 Walking Tours – The Must Do Of A City Break?

We came off the boat & went straight to a walking tour of Ljubljana.

They all have excellent reviews and were free. We turned up, wandered around for about half an hour listening.

Then we decided we were bored shitless & went back to the ‘Eating & Drinking’ square AKA the Ljubljana open kitchen to partake in some food & refreshments.

This was great. We tried a few dishes from a few stalls washed down with a Ljubljana craft beer in the sun. 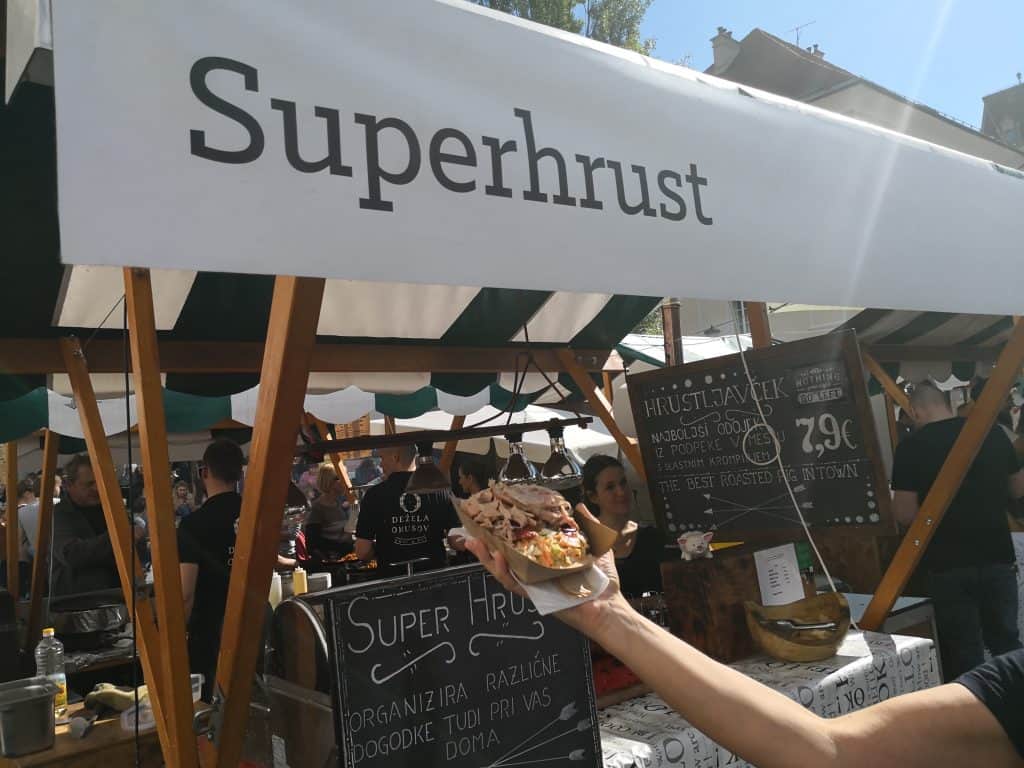 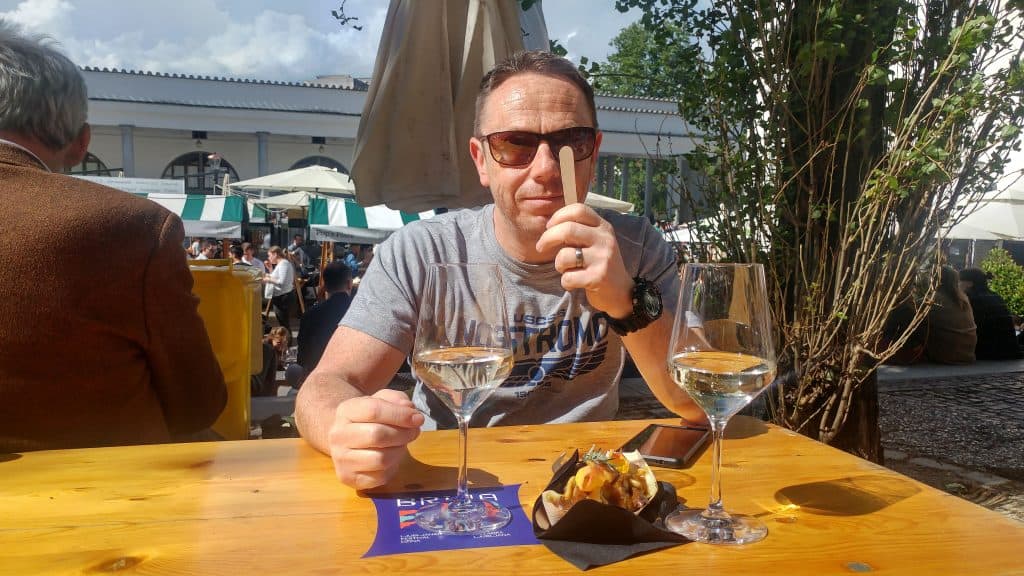 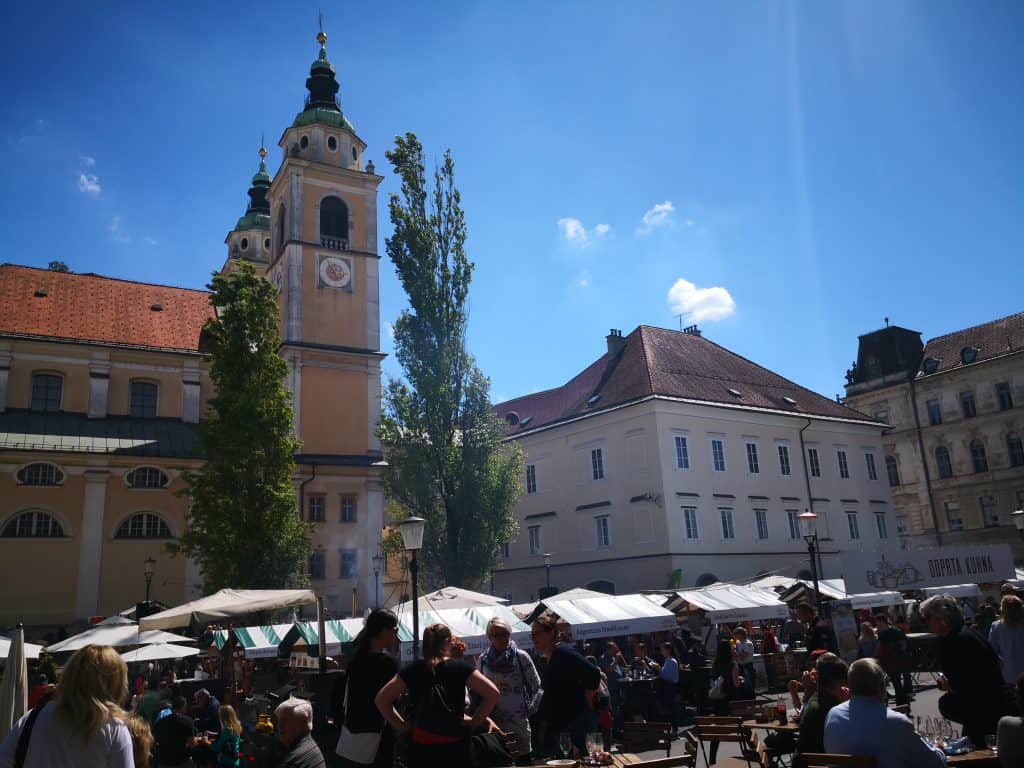 We also discovered that some of the stalls sold wine & were more than happy selling you a glass of wine in a very nice glass & trusted that you would bring the glasses back!

Ljubljana is also very well known for ice cream which quite frankly is a dream come true for me!

Also very impressive cake shops. The ice cream is SO good and such high quality, a far cry from Mr Wippy!! (which I do still like to be fair!). 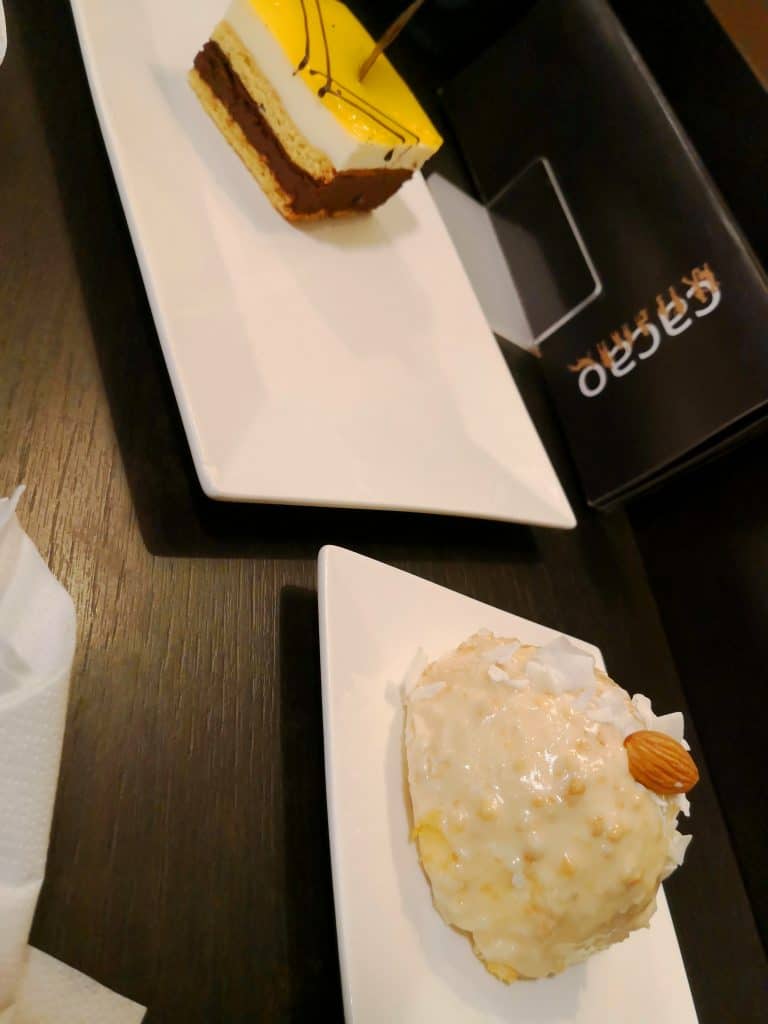 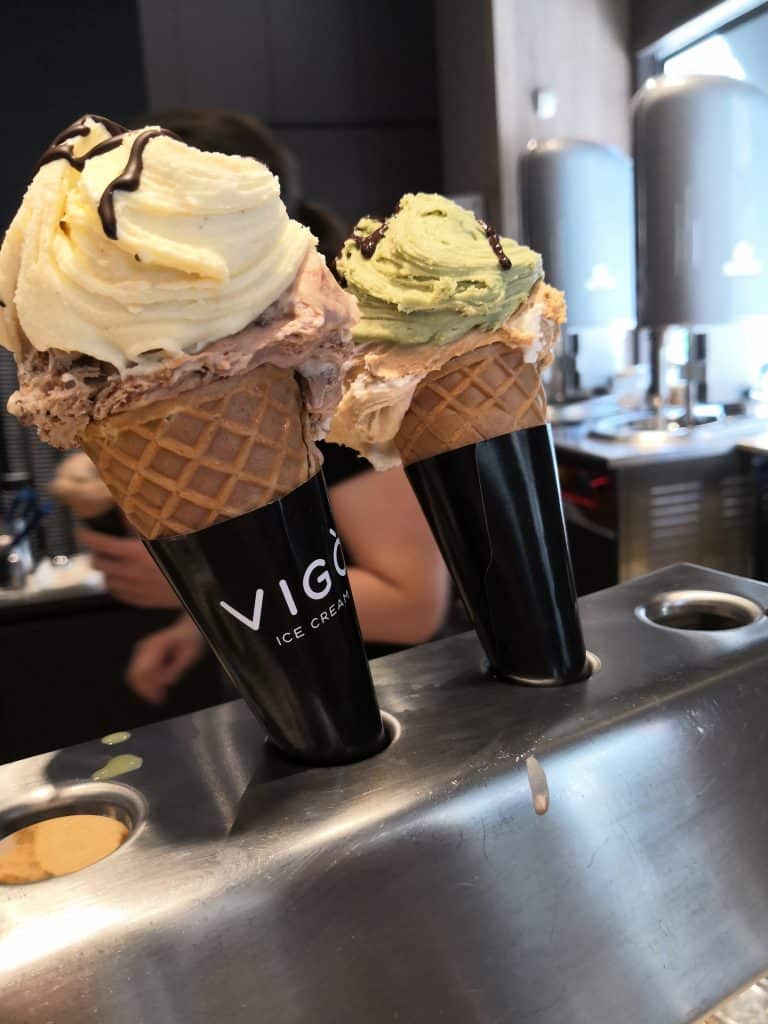 At this point, we have had a few ales so it was decided that we should have some coffee & bit of their famous cake – Prekmurska Gibanica 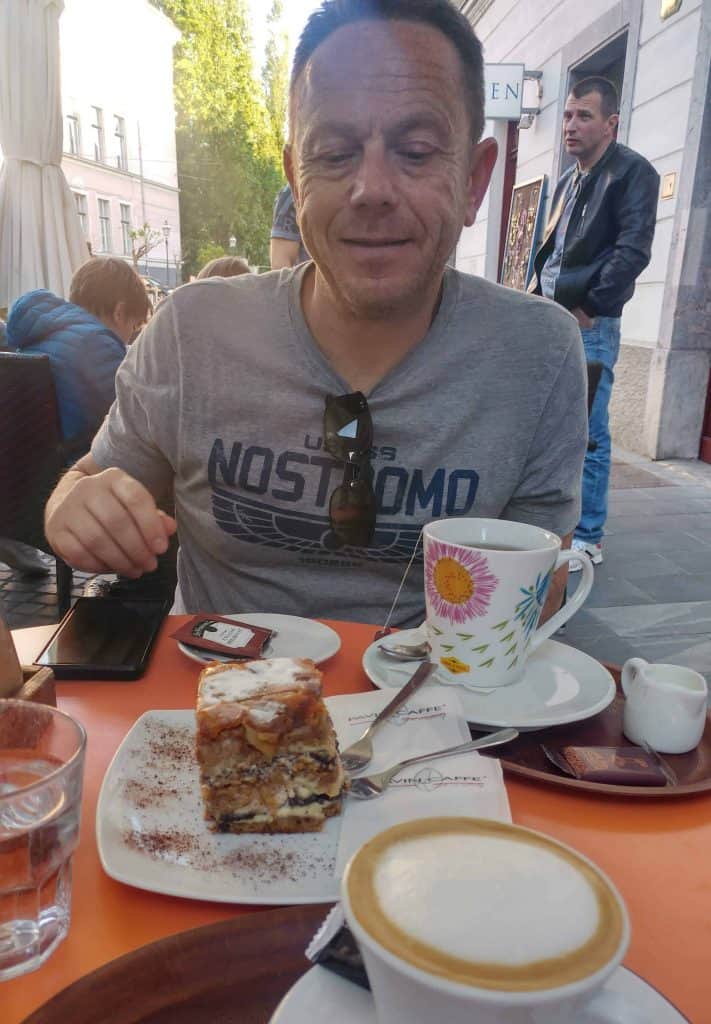 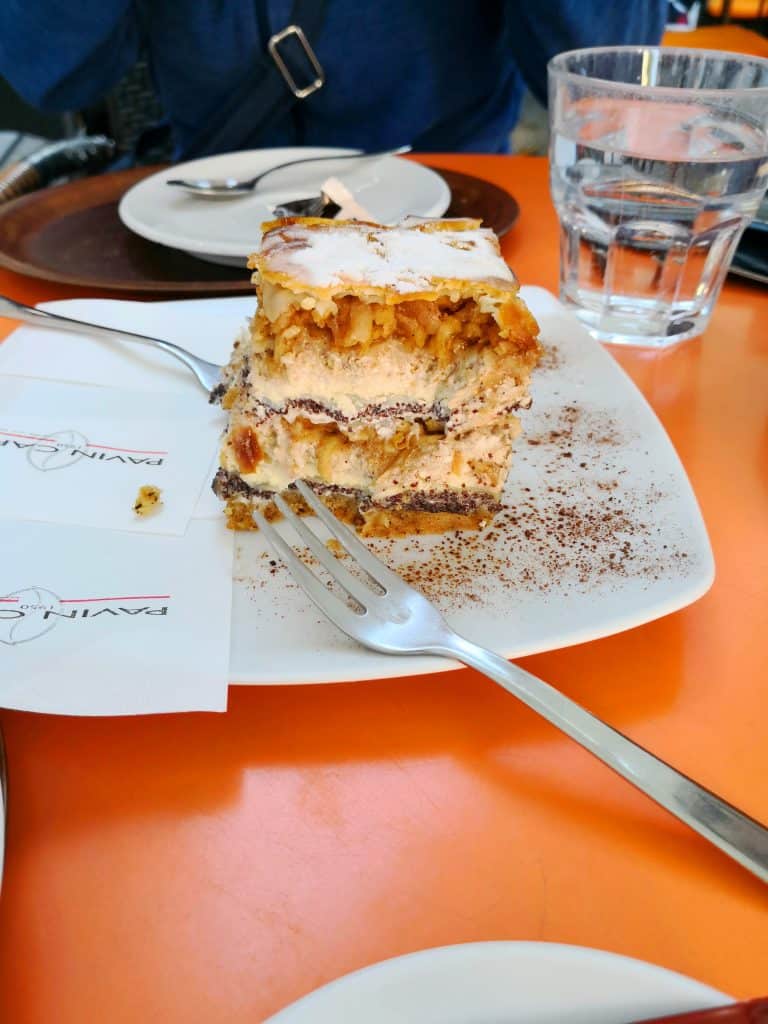 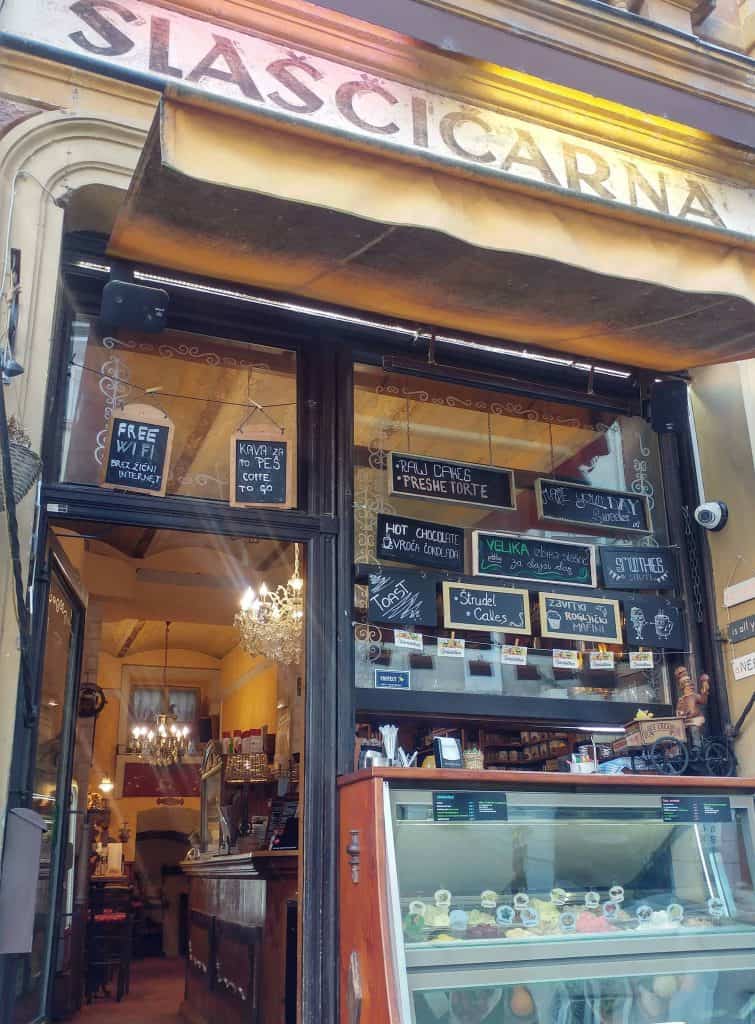 We then went to the hotel that had a rooftop bar (we think it is known as the Ljubljana Sky Bar) (Ljubljana Skyscraper) to get a drink & look across the city & across to the see the castle.

We got there & the view was pretty good – the Sky Bar service, however, was shite! So we took pics & fucked off! 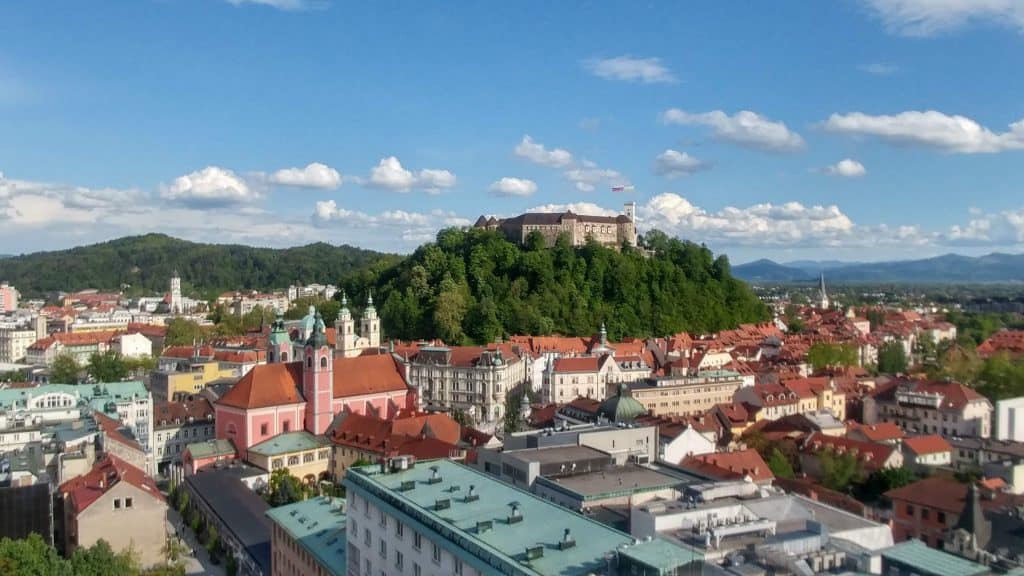 Is It Worth Doing The Union Brewery Tour Ljubljana?
No Idea. Didn’t Bother!

We then walked to the brewery that exists in Ljubljana – Union Brewery. We considered doing the Union Brewery tour but decided against it & just went there for a beer. Pretty glad as they just seemed to do the ‘usual’ – Lager & Bitter. No IPA’s or Pales etc that we could see….not quite the Ljubljana brewery craft beer heaven we were after! 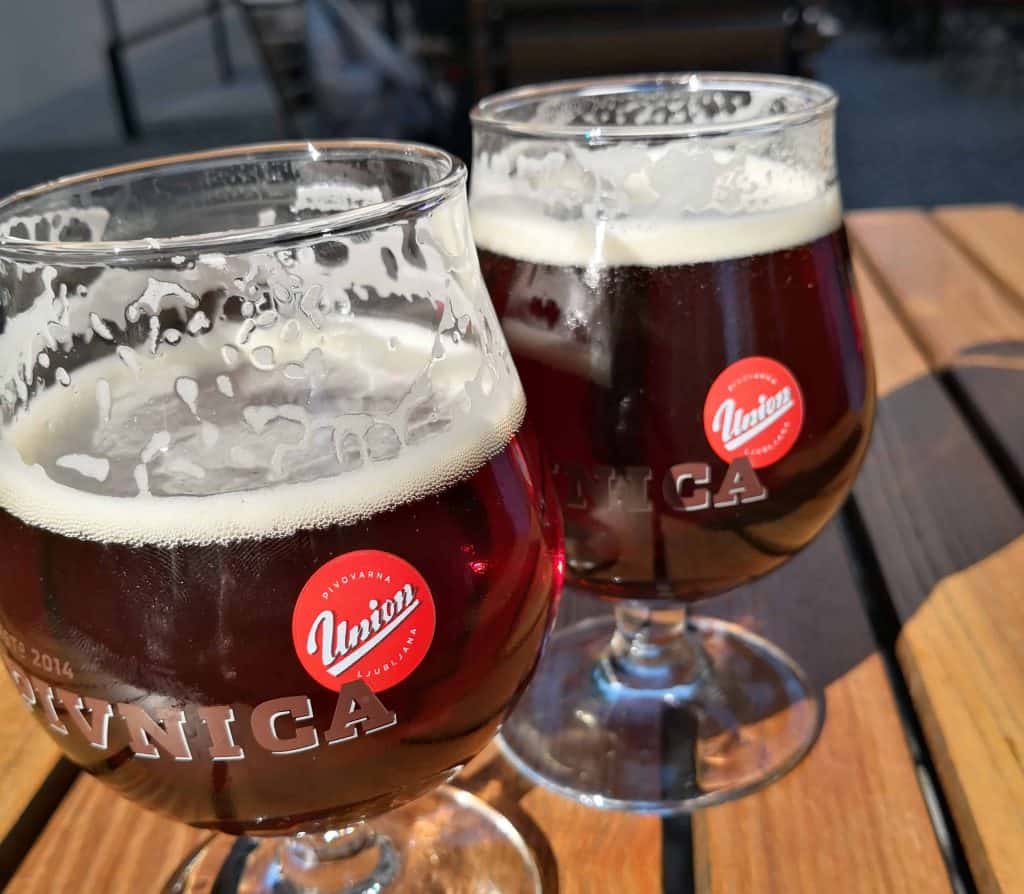 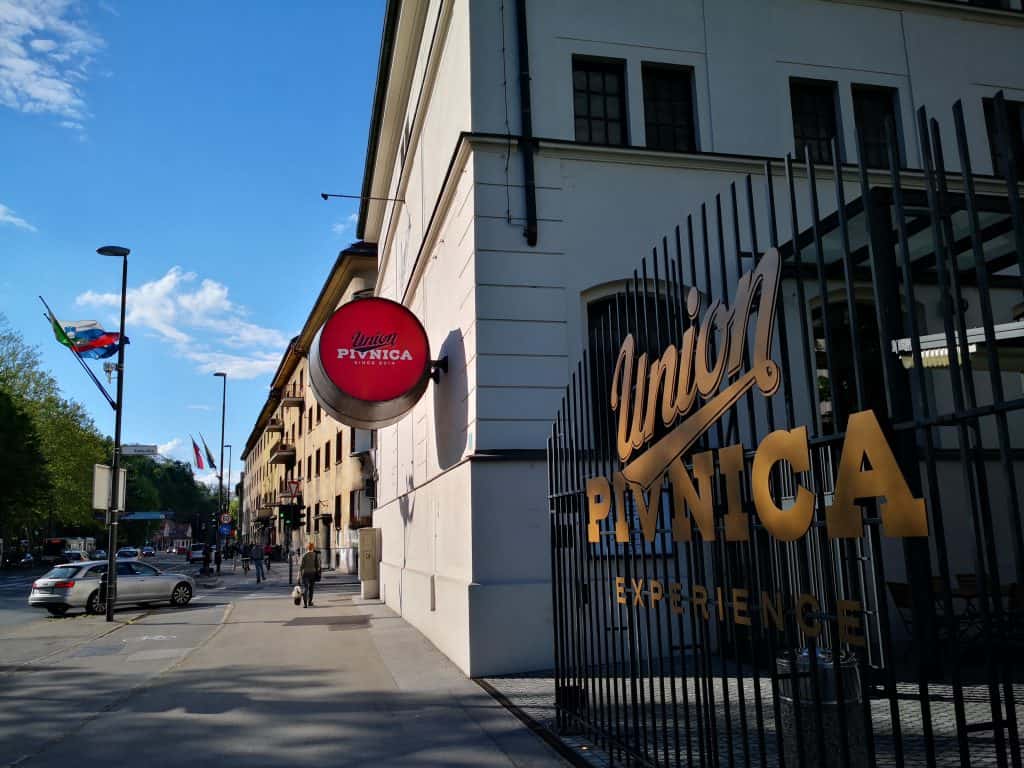 Next was walking to find one of the craft beer places – Lajbah – we sat outside & got a couple of Spank Paddles to try  – lovely!! It included a few ‘ punch’ in the face’ stouts. 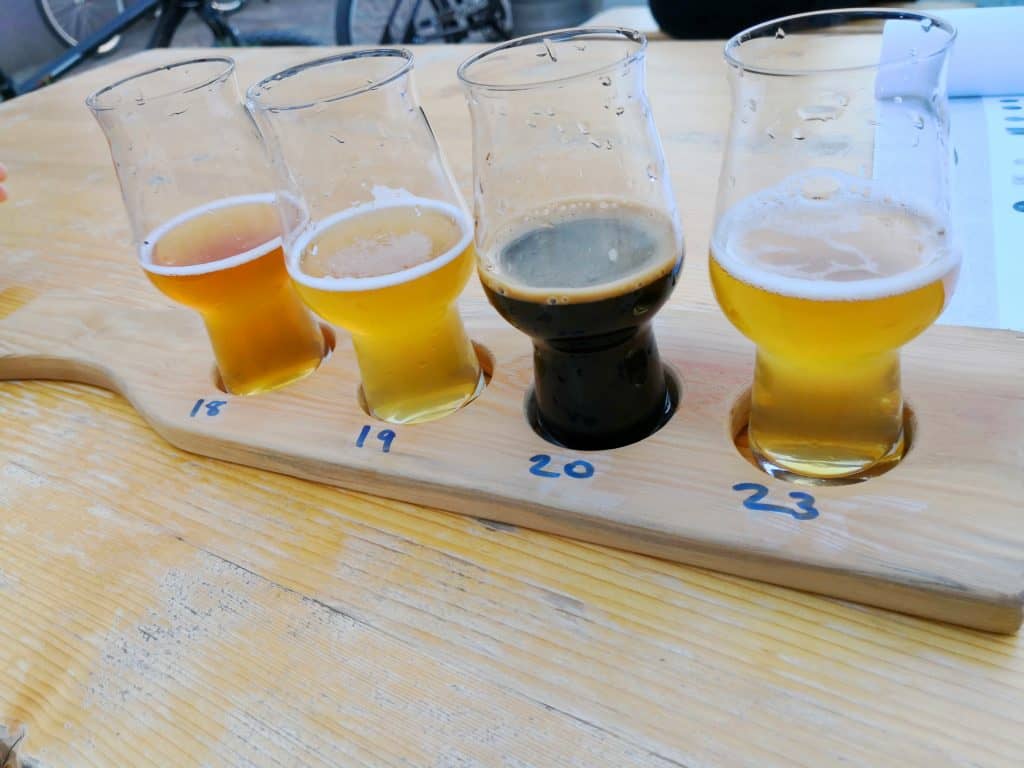 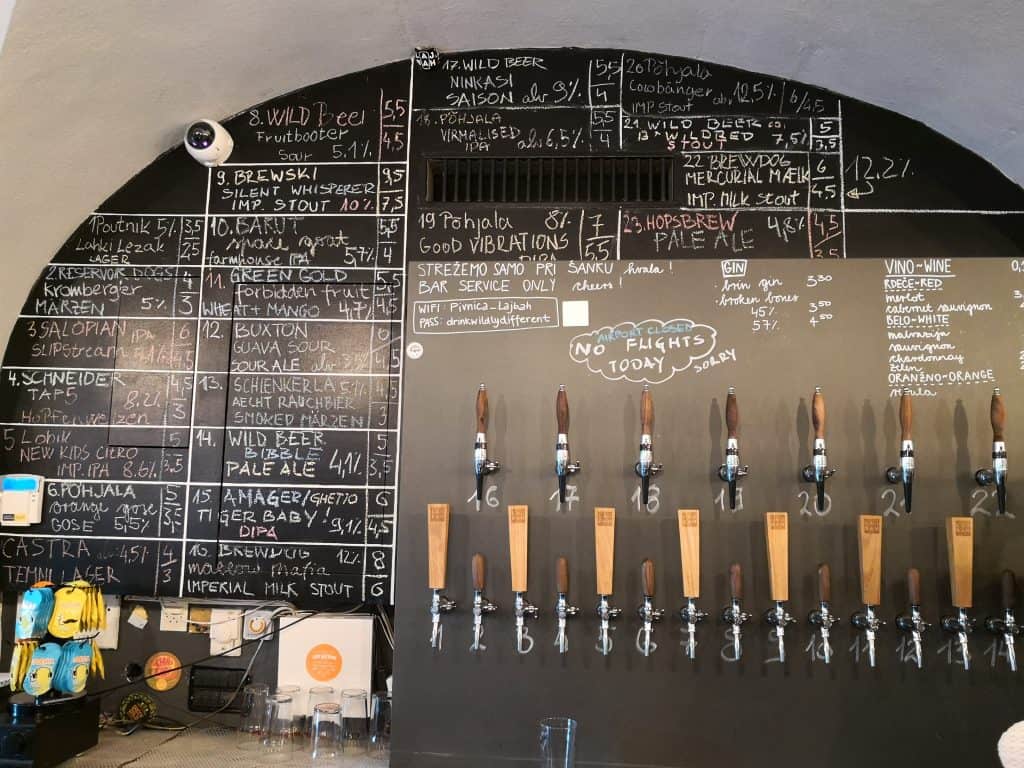 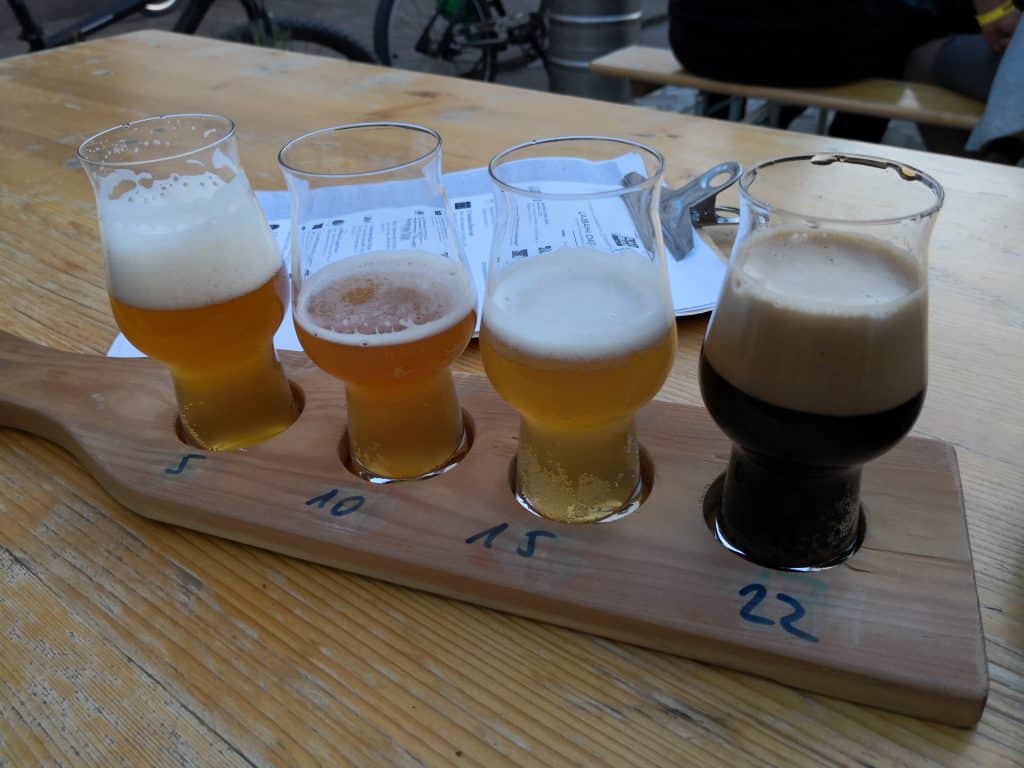 We then pretty much cooked! So back to the apartment & got a pizza from across the road.

Nice little place but by Christ did it give me indigestion & trapped wind. Holy shit that was not a pleasant nights ‘sleep’!!

To make life easier for all those who love their craft beer, I have made a Ljubljana Map highlighting those places that sell the delights of IPA’s, Pale Ales, Stouts, Sours & the like.